On Wednesday October 31st, MDV-SEIA hosted the annual Solar Focus Awards Luncheon, an event recognizing outstanding leadership in the solar industry. The event began with a keynote address by Dr. Mustafa Santiago Ali, Senior Vice President of Climate, Environmental Justice & Community Revitalization at the Hip Hop Caucus. Dr. Ali spoke on the importance of environmental justice and equity, tying it to the incredible work of this year’s award recipients. The Association was proud to recognize seven award recipients this year, including a new ‘Boots on the Roof’ award, which recognizes excellence among the solar workforce. 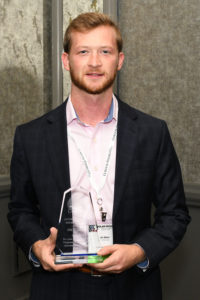 Solar Champions recognize that industry leadership goes beyond each project; but having a vision for our industry, and working each day to realize this vision.

A team of solar developers in Virginia – nearly all of whom attended Solar Focus – founded the Virginia Solar Workforce Development Initiative to train a generation of Virginians in solar construction. First based at Southside Virginia Community College, the initiative will train local men and women to meet the Commonwealth’s growing demand for solar energy. One of the exceptional parts of the Initiative is the first of its kind solar “learning lab,” which serves as a mobile replica of a commercial or utility-scale work site. With hands-on training, students will immediately have a sense of expectations and kinds of skills they’ll develop in the industry.

Rich Allevi of Sun Tribe Solar in Charlottesville worked tirelessly to plan and grade the work site, secure equipment donations, and ultimately construct the site for the Virginia Solar Workforce Development Lab. Rich worked with with teams from Sun Tribe, Faulconer Construction, and Hurricane Fencing to get the job done. Characteristically humble, Rich insisted that he would only accept this award on behalf of all the Founding Members – SolUnesco, Cypress Creek, Commonwealth Energy Ventures, and Strata Solar. Yet the learning lab would not have been possible without the vision and leadership of Rich. 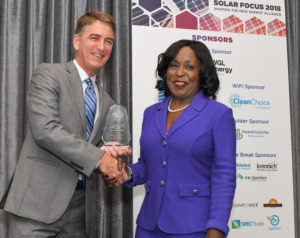 Our Government Champion is the public official who best recognizes the economic and social value of solar power, but seeks to guide the industry’s growth through innovation and equity. The DC Office of the People’s Counsel has been a leading voice among consumer advocates for solar consumer education, expanded solar access and the benefits of distributed energy resources for the larger grid.

This is unquestionably due to the leadership of Ms.Sandra Mattavous-Frye; she and her staff have coordinated countless consumer education workshops, in all eight wards of the city, to equip DC residents with the information they need to go solar.

Ms. Frye has been a national leader in engaging the solar industry in conversations around consumer protection, soft costs, diversity and access. In 2017, she released a Value of Solar study for the District of Columbia which highlighted the extensive benefits of solar for the city and in 2018, she released a DC Consumer’s Guide to Going Solar. Additionally, in the most recent Pepco rate case, DC OPC took a stand against residential demand charges which were eliminated from the utility’s petition in a joint settlement approved by the DC Public Service Commission. For Ms. Frye and her team, information is power for consumers. Her office has been a model of consistent consumer engagement and expert advocacy on solar issues. 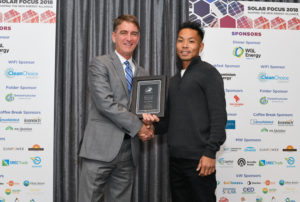 Our “Boots on the Roof” award recognizes the men and women who power through blazing sun and winter chill to ensure projects – and our industry as a whole – are exemplary. Our recipient joined the Solar Energy Services in 2012 with very little relevant experience, and currently embodies what an ideal installer looks like.

From Day 1, Kevin Hoang embraced the opportunity and steadily improved his knowledge by embracing training opportunities in his spare time and always asking thoughtful questions. From his days as a Helper all the way to his current role as a Crew Leader, he has always set a quiet example to his peers and his supervisors of commitment, pride, and execution.

Kevin bends over backwards to ensure customers are thrilled with their new PV system, answering any questions they have, and if he doesn’t know the answer, will hound the PMs to get the customer an answer. He’s a solar advocate: any chance he gets, Kevin promotes the benefits of solar to his family, friends, and network, generating successful sales leads through personal efforts. He believes in continuous improvement. 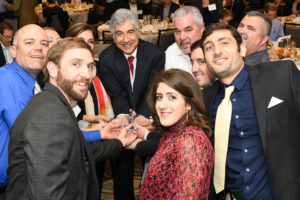 Our Project of the Year employed innovation, overcame challenges, and was creative and successfully implemented.

NUTH selected Aurora Energy for this project, featuring 120,000 sq feet of new office space, 10,000 square feet of retail space, and a community park which set a high bar of having a net zero carbon footprint. Through energy efficiency, an extensive solar thermal system, and 3,000 high efficiency solar panels – designed to produce 1 MW of power – Aurora ensured the headquarters’ energy will be generated entirely on-site through renewable power. We couldn’t be prouder that New United Therapeutics went zero carbon with the innovation of one of our members.

We’d also like to recognize the other contributors to the project: 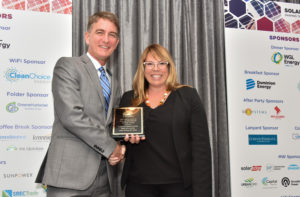 Our Solar Program of the Year award recognizes public and private partnerships that address equity and access to solar energy.

We’re proud that DC is ensuring that the leaders transforming our electricity system are representative of all communities. That’s why we’re acknowledging the District Department of Energy and Environment, Employment Services, and GRID Alternatives for Solar Works DC. This program prepares District residents to enter careers in solar and related industries while reducing energy costs for qualified low-income District homeowners by installing solar systems on their homes. In just one year of successful implementation, Solar Works DC placed no-cost solar on 59 income-qualified families’ homes, an estimated $888,000 in lifetime savings. 5,700 tons of greenhouse gas emissions prevented from entering the atmosphere, and 78 individuals trained in solar installation skills, with a 50% placement rate into solar or related jobs. 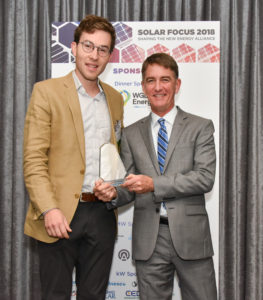 This award, recognizing a new concept or product that promises to help advance the solar industry went to Green Applications for signing the first behind the meter corporate PPA in Virginia. Based in Gordonsville, this 860 kW project was the largest net metered solar array in VA. This system consists of over 2,500 panels and will provide almost 50% of the facility’s energy usage, which is one of the largest printers and distributors of textile merchandise and heat-applied graphics.

Robert Butters and the Green Applications team highlighted the value commercial PPAs provide to the state, as well as the success of DMME’s VirginiaSAVES financing program.

Taylor Brown of Sun Tribe Solar is pictured accepting the award on behalf of Green Applications. 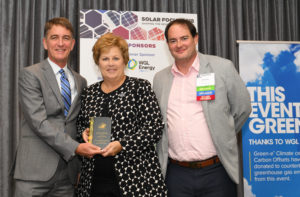 Our Lifetime Achievement Award is given to the individual who has been committed to exemplary service in the solar industry throughout their career.

We were honored to present the 2018 award to Maryland Delegate Sally Jameson for her outstanding contributions to solar in her home state. Sally’s leadership and vision on shaping Community Solar policy and expanding Maryland’s RPS through her work on the Public Utilities Sub-Committee and the Maryland Strategic Energy Investment Advisory Board have paved the way for industry success on a broad scale in the state. Maryland is a leader in solar energy because of the tireless efforts of Sally and her team, and we couldn’t think of a better candidate to receive this year’s Lifetime Achievement Award.

Thank you to our members and Solar Focus attendees for your 2018 awards submissions. We look forward to recognizing more great work from industry partners at Solar Focus 2019.