On Tuesday, October 9th MDV-SEIA provided testimony for the Clean Energy DC Omnibus Amendment Act of 2018 (B22-904) before the Transportation and the Environment Committee. The legislation seeks to increase the District’s Renewable Portfolio Standard (RPS) from 50% to 100% by 2032, while maintaining the current solar carve-out of 5%. It also includes the Building Energy Performance Standards (BEPS), long-term Power Purchase Agreement (PPA) requirements, changes to the Standard Offer Service (SOS), and an increase to the Sustainable Energy Trust Fund (SETF) fee. 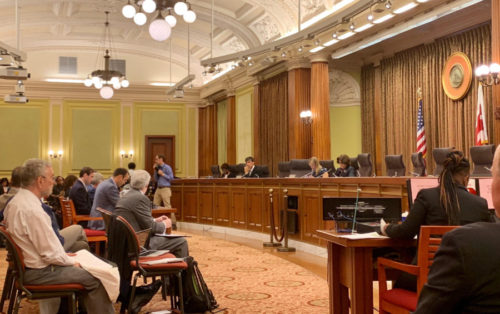 The hearing, which spanned more than seven hours and included 90 witnesses, consisted of testimony showing overwhelming support for the legislation, specifically the importance of the solar carve-out. Many witnesses, including Leigh Yeatts of MDV-SEIA, cited the solar carve-out as the main driver of solar job creation and economic investment, which has paved the way for the District to become the solar powerhouse it is today with over 15 MW installed in the last two years.

In addition to maintaining a strong solar carve-out, Ivan Frishberg of Amalgamated Bank emphasized the need to establish a Solar Alternative Compliance Payment (SACP) level that does not fall below $300, an aspect that the legislation does not currently address. Tony Clifford of Standard Solar mentions how the RPS and D.C. based solar generation helped the District become the first city in the world to be certified as Leadership in Energy and Environmental Design (LEED) Platinum, the highest level of designation. Other testimony included Herb Stevens of New Partners Community Solar, who described solar as a method for “financing the fight against climate change” and members of Faith organizations who have made the switch to solar.

The clear message was this: solar is tangible proof that the RPS mechanism works. Due to forward-thinking policy and favorable market conditions, the solar industry has been able to meet and exceed the targets set for it by law since the RPS was first enacted in 2005. Under a more aggressive solar carve-out schedule that extends out to 2050, the District will be able to create thousands more local, high-paying jobs and achieve its’ climate goals through clean electricity generated within city borders.

You can view the recording of the Oct 9th Transportation and the Environment hearing here.